At least 49 people have died and more than 100 are injured after a huge fire swept through a container depot in Bangladesh.

The blaze triggered multiple explosions when it broke out on Saturday night in the southeastern town of Sitakunda.

Firefighters have been struggling to get the flames under control after blasts went off in a container full of chemicals.

The explosions shook the neighbourhood, shattering the windows of houses more than two miles away. 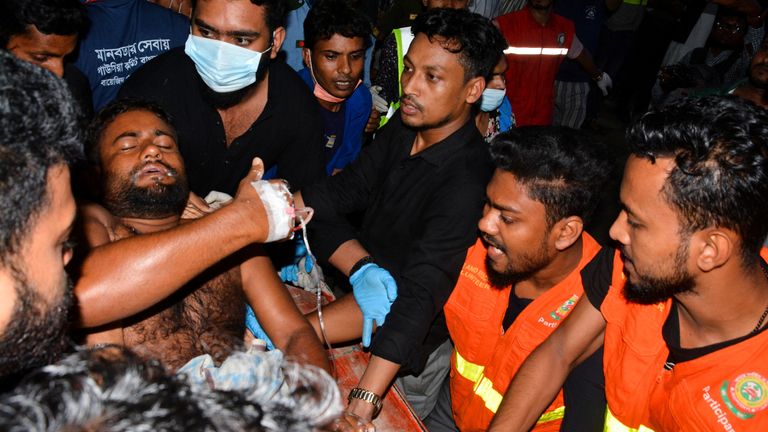 Image: An injured victim is brought to a hospital after the blast

At least nine firefighters are among the dead, while another 15 were being treated for burns, the fire service said.

The cause of the fire has not yet been determined and emergency services were still trying to put it out on Sunday morning.

By Sunday afternoon local time the death toll had risen to 49, according to Ekattor TV station, and the area's civil surgeon warned that the number could still rise.

Mohammed Elias appealed to all local doctors to help tackle the situation, and has also called for emergency blood donations.

Prime Minister Sheikh Hasina expressed her shock at the accident and ordered adequate arrangements for the medical treatment of the injured. Image: Firefighters work to contain a fire that broke out at a container depot in Bangladesh. Pic: AP

Bangladesh has a history of industrial disasters, including factories catching fire with workers trapped inside. Monitoring groups have blamed corruption and lax enforcement.

In 2012, about 117 workers died when they were trapped behind locked exits in a garment factory in Dhaka. Image: Smoke rises from the spot after a massive fire broke out in an inland container depot at Sitakunda

In 2019, a blaze tore through a 400-year-old area cramped with apartments, shops and warehouses in the oldest part of Dhaka and killed at least 67 people. Another fire in Old Dhaka in a house illegally storing chemicals killed at least 123 people in 2010.

In 2021, a fire at a food and beverage factory outside Dhaka killed at least 52 people, many of whom were trapped inside by an illegally locked door.