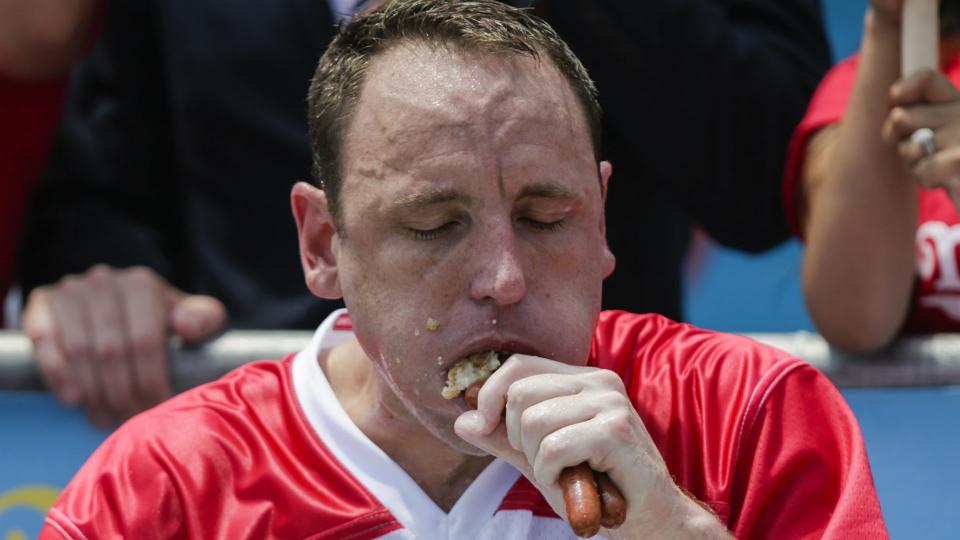 Joey Chestnut is one of the most famous -- or infamous -- competitive eaters in the world. While he competes in all manner of competitions, July 4's Nathan's Hot Dog Eating Contest is his Groundhog Day. It's the day competitive eating takes center stage, and Chestnut never disappoints.

Chestnut first dove into the world of competitive eating in 2005 while he was a student at San Jose State University. His first major victory came that year when he ate six-and-a-half pounds of fried asparagus in 11 1/2 minutes. That year, Chestnut qualified for his first Nathan's Hot Dog Eating Contest and ate 32 hot dogs.

By 2011, Chestnut had become such a force on the eating circuit that he was able to quit his full-time job in construction management and focused solely on training for eating competitions. That year, he won his fifth straight Mustard Belt, awarded to the winner of the Nathan's Hot Dog Eating Contest.

Since then, Chestnut has cemented his status as the best competitive eater of all time. He has his record up to 76 hot dogs in 10 minutes, set in 2021 after eating 75 in 2020. Can Chestnut one-up himself again in 2022?

Joey Chestnut net worth: How much does he make?

The life of a competitive eater may not be glamorous, but it can pay pretty well.

Chestnut's 2022 net worth is estimated to be $2.5  million, according to Celebrity Net Worth. The Nathan's Hot Dog Eating Contest, an event Chestnut has won 14 times, pays its winners $10,000 every year, .

The site also states that the top competitive eaters can easily make $500,000 a year between a combination of winnings and sponsorships.

Specific sponsorship details are hard to come by, but in 2014 alone, Chestnut reportedly made $230,000. His 14 Nathan's Hot Dog Eating Contest victories have resulted in a combined $140,000 worth of winnings (before taxes, of course).

Joey Chestnut has several endorsements from a variety of companies, with most of course being food companies. Chestnut has made social media posts endorsing Hooters, Hostess, Coney Island IPA and even Pepto Bismol.

Chestnut launched his first company that features a line of condiments in 2018.  Joey Chestnut Eats includes Chestnut’s Firecracker Mustard, Boardwalk Coney Sauce and Deli-Style Mustard with prices ranging from $7.50 to $8.

Chestnut doesn't use social media all that frequently, but does use it sporadically to promote appearances at restaurants or certain food products. His Twitter account has 43.1K followers, and his Instagram profile has 76.2K followers.

How many hot dogs did Joey Chestnut eat in 2021?

Chestnut set a new record for most hot dogs eaten in 10 minutes at the 2021 Nathan's contest, housing 76 in total. The previous record was 75, set by Chestnut in 2020's iteration of the competition.