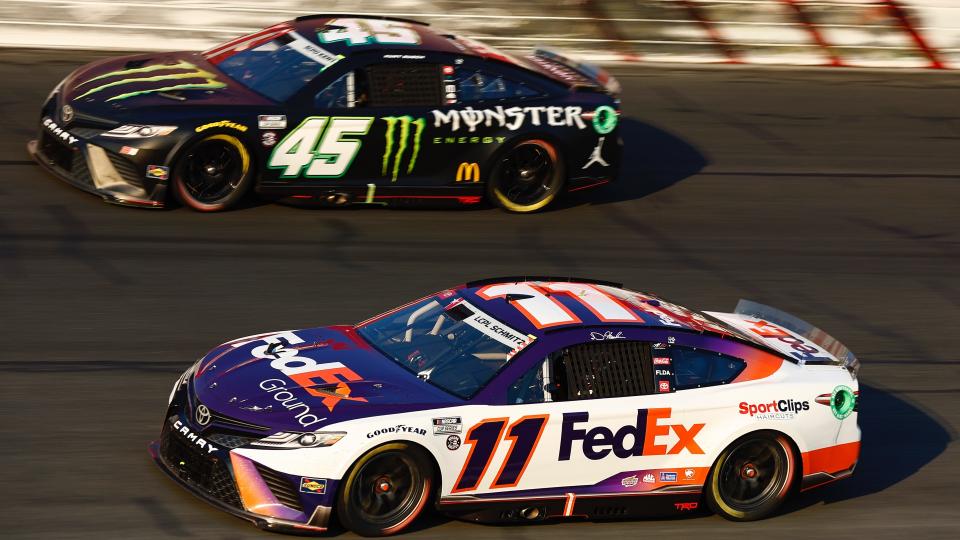 The Enjoy Illinois 300 is next up on the NASCAR Cup Series calendar. If the previous race is any indication, it could be a doozy.

Last week's Coca-Cola 600 was sloppy at times, full of spills and thrills. And although Joe Gibbs Racing's Denny Hamlin outpaced teammate Kyle Busch to earn a victory, Hamlin's performance was overshadowed by a 12-car wreck, as well as Chris Buescher's scary rollover crash.

A different set of racers will take to the track in Madison, Ill., this weekend. And the stakes are high; the Cup Series regular season is winding down, meaning wins and top-five finishes are becoming all the more important. Racers will need to respond to unfamiliar track conditions as they hope to improve their chances of qualifying for the Cup Series playoffs.

The Sporting News is tracking live updates and lap-by-lap highlights for NASCAR's race at Gateway on Sunday. Follow for complete results from the Enjoy Illinois 300.

5:29 p.m. - Busch takes Stage 2, while Blaney outlasts Stenhouse and McDowell to secure tenth-place and earn the final point of the stage.

5:28 p.m. - After 137 laps, 23XI Racing's Kurt Busch leads the way. Martin Truex Jr., who has been linked with retirement recently, sits in second place, less than half a second behind Busch's pace.

5:21 p.m. - Ricky Stenhouse Jr. knocked Bubba Wallace towards the fence. Hamlin didn't seem to like that too much; don't forget, Hamlin helped found 23XI, the team Wallace races for.

5:13 p.m. - McDowell has been a force so far. He entered Sunday's race leading just four laps during the Cup Series season. He's held pole position in 17 laps so far. Really impressive showing for the No. 34 car.

Almirola and Reddick are within a second of McDowell's lead.

5:08 p.m. - After the race restart, Hamlin and Elliott ended up next to Chastain. Elliott rode Chastain's bumper while Hamlin had inside position. Now, Hamlin isn't letting Chastain pass by, much to the delight of the Gateway faithful.

What a race this has been. Michael McDowell setting the pace right now, holding a .2 second lead over Aric Alimrola.

5:06 p.m. - Chastain has been a thorn in some of these drivers' sides today. Chase Elliott's No. 9 car and Cindric's No. 2 car seemed to try to commit a "squeeze play", boxing out Chastain from passing through the middle. Chastain stayed aggressive though, clipping into the side of Elliott's car and causing him to spin out. Bubba Wallace spun out as a result of the wreck, too.

The No. 9 spins coming off of Turn 4. pic.twitter.com/UREj4vSLlk

Wreck could have been much worse. Seems Elliott and Wallace suffered minimal damage and look okay to continue. Caution flag still waved, however.

Elliott did not seem pleased, either.

"I mean, what was [Chastain] doing? He ran me over getting into [Turn] 3 and then ran me over again."- Chase Elliott https://t.co/R4rtxNmc9L pic.twitter.com/tOUUL069YG

4:59 p.m. - Corey LaJoie done for the day after suffering an engine problem, according to Fox Sports' Bob Pockrass.

LaJoie done for the day for an engine issue.

4:44 p.m. - Joe Gibbs Racing's Kyle Busch has the lead as we approach the halfway point of Stage 2. Hamlin looked to try to chase Chastain into the infield. However, Chastain was able to escape Hamlin's grasp and pass him. Spicy stuff.

4:38 p.m. - A little more context on Hamlin's spin out; seems Chastain knocked into the back of Hamlin's car, causing Hamlin to swerve into the wall.

Per FS1's broadcast, it seems the data indicates that Chastain hit his brakes before trying to pass Hamlin. Something to watch out for.

4:34 p.m. - Caution flag waved for Denny Hamlin's No. 11 car. Seems he sustained a little damage on his rear bumper.

4:25 p.m. - The green flag is waved for Stage 2 and Team Penske teammates Cindric and Ryan Blaney are competing for first and second place. Blaney has the edge early, although Tyler Reddick's No. 8 is making a charge for first as well.

4:14 p.m. - Cindric takes Stage 1, capitalizing on Briscoe's slight pitfall to capture the green flag. It's his first stage victory of the season.

4:05 p.m. - Cindric takes the lead after Briscoe's tire goes slightly. He was fairly efficient in his pit stop, though, so Briscoe will be hoping this doesn't him back too much.

3:58 p.m. - Tough start to the race for Joe Gibbs Racing's Christopher Bell. Bell finished Saturday's qualifier in third-place but has dropped 10 spots. FS1's broadcast reports that Bell's car is too loose, so he doesn't have quite as much control as he would like.

Will be interesting to see if he's able to get back on track when he finally pits.

3:54 p.m. - Ten laps in and Briscoe is holding off Team Penske's Austin Cindric for a slight edge. Still a lot of race to go, but it seems Briscoe is making the most of pole position early.

3:49 p.m. - It's been a frantic start to the race. Joey Logano and Ross Chastain got tight with Denny Hamlin and Aric Almiorla three laps into the race.

3:37 p.m. - The fighter jets are off, the national anthem has been sang and the green flag is scheduled to be waved in five minutes.

What channel is the NASCAR race on?

Fox Sports 1 will carry the U.S. broadcast of the Enjoy Illinois 300. Canadian viewers can find Sunday's race on TSN5.

Fox's tandem of Mike Joy and Clint Bowyer will be on-air again for Sunday's race, with Joy providing lap-by-lap coverage and Bowyer offering analysis. They'll be joined by guest analyst Michael Waltrip. Fox Sports has used a rotation of guest analysts to replace Jeff Gordon, who left the network to join Hendrick Motorsports as an executive.

The Fox networks' coverage of the NASCAR Cup Series in 2022 will come to a close after the Toyota/Save Mart 350 at Sonoma on June 12. Coverage will move to NBC and USA Network beginning June 26 with the Ally 400 at Nashville Superspeedway.

Here is the complete starting lineup for NASCAR's race at Gateway.