Nick Kyrgios and Stefanos Tsitsipas have both been fined following their wild third round Wimbledon match.

Tsitsipas received the larger penalty of the pair, fined US$10,000 (AU$14,656) for unsportsmanlike conduct.

The No. 4 seed was warned twice by the chair umpire for ball abuse, hitting a ball into the crowd before appearing to direct a volley at his opponent out of frustration.

Kyrgios, on the other hand, was fined US$4,000 (AU$5,862) for his audible obscenity following a code violation.

It is the Australian's second fine of the tournament, docked US$10,000 (AU$14,656) for spitting in the direction of a spectator at the end of his first round match. 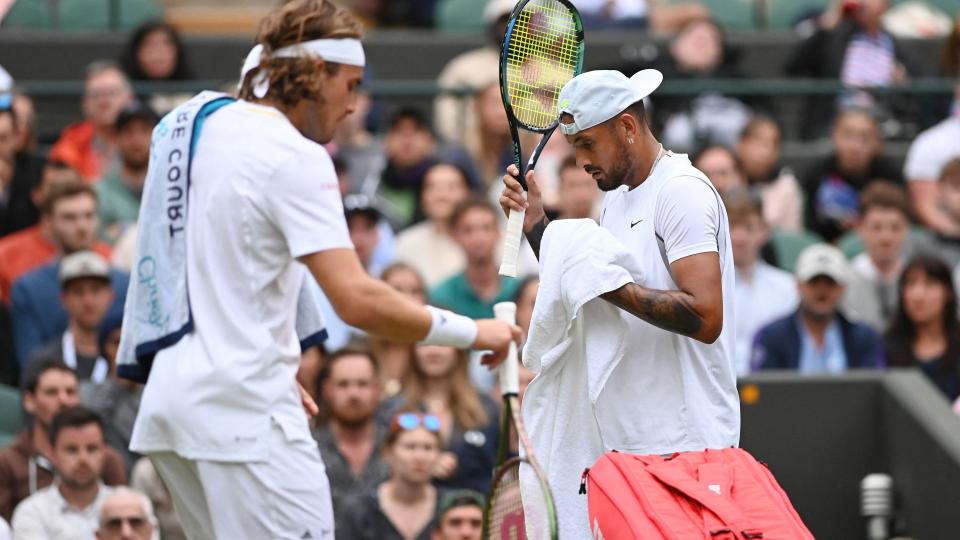 The drama continued after the pair's fiery encounter, with Tsitsipas levelling bullying claims against Kyrgios.

The 27-year-old Australian then responded in a typically brazen fashion.

“Maybe he should figure out how to beat me a couple more times first and then get to that,” Kyrgios said.

“The circus was all him today, I actually felt great. He’s making that match about me. He’s got some serious issues.

"I’m good in the locker room, I’ve got many friends, I’m actually one of the most liked... he’s not liked. Let’s just put that there.

"Apart from going back and forth with the umpire, I did nothing disrespectful towards him.”

Kyrgios will next face unseeded American Brandon Nakashima in the round of 16.

If successful, he faces a potential match-up with fellow Australian Alex de Minaur in the quarter-finals.