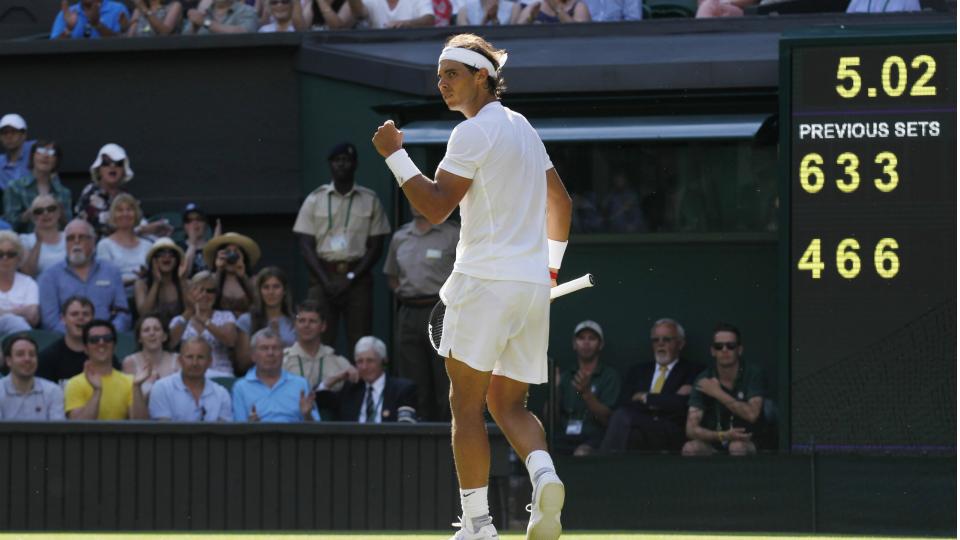 After his Australian Open and French Open triumphs, Rafael Nadal continues his pursuit of a 2022 Grand Slam when Wimbledon starts on June 27.

An injury-plagued 2021 has given way to a spectacular season so far for Nadal, his emphatic Roland-Garros final triumph over Casper Ruud following up his epic comeback win over Daniil Medvedev in the Melbourne decider.

At 36, there are inevitably concerns about whether Mueller-Weiss Syndrome, the foot problem that kept Nadal out of the second half of 2021, will impede the all-time great again.

Is Nadal heading for glory at SW19? Find out the latest ahead of the third major of the year.

Nadal's next match at Wimbledon is in the last 16 against 21st seed Botic van de Zandschulp. The pair met for the first time at Roland-Garros this year, with Nadal winning in straight sets.

Nadal made light work of Lorenzo Sonego in round three. In the second round, Nadal defeated Ricardas Berankis in four sets in what was only the second meeting between the players.

The Spaniard began with a four-set victory over Francisco Cerundolo to set up a meeting with the experienced Lithuanian, who recorded an impressive straight-sets win over Sam Querry in the first round.

Despite grass being hard-hitting Nadal's least favourite surface, the two-time champion has reached the final four of the tournament on seven of the 14 occasions when he has played Wimbledon, including in each of his past two appearances.

Nadal had just turned 17 when he progressed to the third round of Wimbledon on his debut in 2003, and he made the final in 2006 and 2007, taking Roger Federer to four sets on his first tilt at the title and five sets on his second shot at glory.

Revenge was Nadal's the following year, winning an epic against the Swiss legend by taking the fifth set 9-7 in a final lasting almost five hours — a match considered by many to be one of the greatest the sport has seen.

Victory was far more straightforward in the 2010 final, when Nadal beat Tomas Berdych in straight sets as part of a year in which the only major he failed to capture was the Australian Open.

Defeat against Novak Djokovic in the 2011 final prefaced a stretch of six years when Nadal did not progress beyond the fourth round, before he reached the semifinals in 2018 and 2019.

Djokovic edged Nadal 10-8 in the fifth set in the first of those, and Federer ousted him on his most recent appearance before a two-year break caused by the cancellation of the tournament during the pandemic and, in 2021, that foot injury.

Rarely has there been such an incentive for Nadal to shine at Wimbledon as there is in 2022. Djokovic will start as favourite, but Nadal knows that his first title at the tournament in 12 years will move him tantalisingly close to the calendar Grand Slam — a feat no player in men's singles has managed since Rod Laver in 1969.