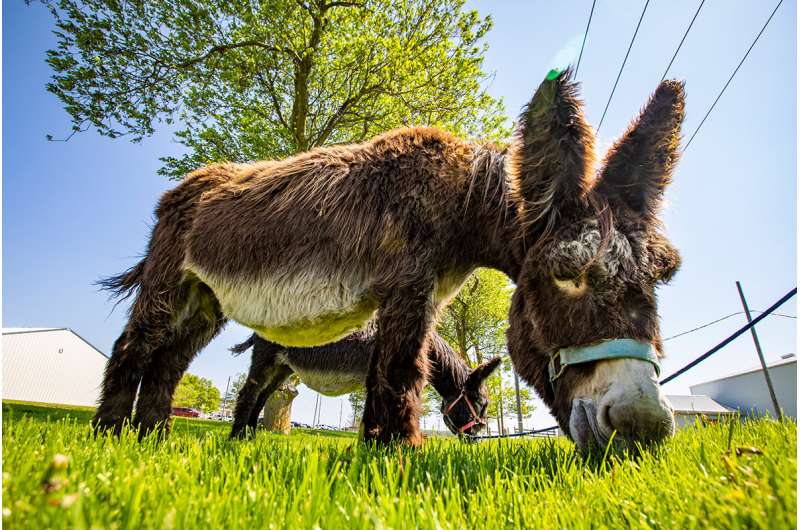 Baudet du Poitou donkeys are endangered. Their numbers have dwindled to only 300-400 worldwide. A breeding effort is underway at the University of Illinois Urbana-Champaign’s College of Veterinary Medicine to expand their numbers and help save the breed from extinction. Credit: Michelle Hassel, Public Affairs | Illinois

Nothing I've read about the Baudet du Poitou donkeys prepares me for my first sight of them. They are girthy, with massive round bellies and oversized ears that swoop forward and back, sometimes independently of one another. They are covered in thick hair that hangs in shaggy tufts, "like mammoth fur," says my companion on this adventure in equine medicine, Public Affairs senior photographer Michelle Hassel.

We're here today with veterinarian and Ph.D. student Dr. Giorgia Podico to observe these exotic animals and check on their reproductive status. Podico is part of a team that is trying to impregnate these two donkeys, which are endangered and in need of conservation. Three days ago, the two jennies were artificially inseminated with semen preserved for 25 years in one of the U. of I. College of Veterinary Medicine's freezers.

The college has worked with Baudet du Poitou donkeys since 2020. Even though he is long gone, Saadi Du Bourg, the jack who provided the semen sample for the new effort, may still sire offspring through artificial means, Podico says.

The female donkeys are 10 to 12 years old. The larger, darker one is Sophie. Her companion, Sourbette, is a lighter shade of brown. They huddle together, oblivious of a two-year-old jack in the pen next to theirs in the equine reproductive wing of the Large Animal Clinic at the U. of I. The jack's name is Kipling, and he's much grouchier than the jennies, Podico says.

The stockiness of Baudet du Poitou donkeys makes them a good breed to cross with horses to produce sturdy mules for farm work, Podico says. They were bred in the Poitou region of France in the Middle Ages, possibly from donkeys brought there by the Romans centuries earlier.

Some were shipped to the U.S. in the 19th and 20th centuries, but their unique genetic characteristics were lost through interbreeding with donkeys here.

These three were sent to the U. of I. from a farm in Vermont that is trying to establish a breeding program for them in the U.S. Dr. Igor Canisso, a veterinary specialist in equine reproduction in veterinary clinical medicine at Illinois, is leading the breeding effort.

Podico opens the gate to the pen and tries to coax the donkeys outside.

"They're very stubborn, donkeys. You know, they're famous for that," she says. "They're smarter than horses. You can't really convince them to do something they don't want to do." 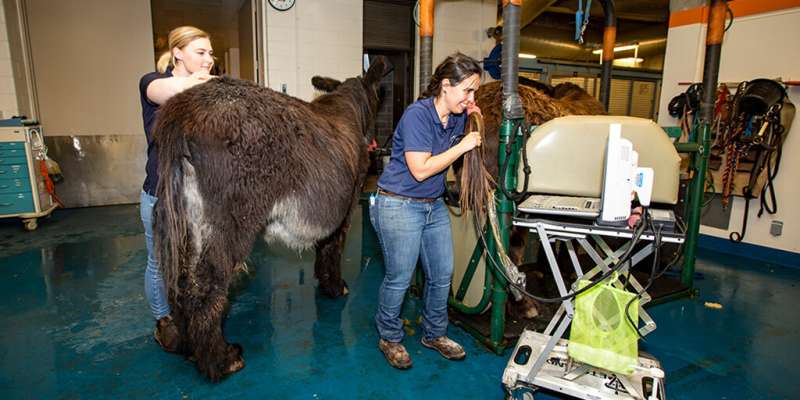 After a little coaxing, the donkeys begin to move. They probably know they're headed outside to an area where they can munch some fresh grass, an activity they seem to enjoy.

"And don't try to speed them up, because they don't go fast," Podico says. Donkeys normally move "at sloth speed," she says.

After their snack, the donkeys are led back inside the facility. On the way, they pass an outdoor pen where a large dark mare rushes to the fence and calls out to them, neighing loudly. They snap to attention and bray back at her. The three once shared a pen and clearly regard one another with affection, Podico says.

Once inside, Podico and her colleague, veterinary resident Dr. Kianna Spencer, coax each of the hesitant donkeys into a narrow stall where an ultrasound can be performed. They are checking the jennies for early evidence of an implanted, fertilized egg. The odds are against them, however. Artificial insemination with formerly frozen semen can cause inflammatory reactions that interfere with pregnancy, Podico says. At best, studies have shown, they have a 1 in 5 chance of becoming pregnant.

Despite the odds, one of the jennies inseminated here in 2020 had a successful pregnancy. Her offspring, a jack named Hamilton, was born prematurely on the farm in Vermont and nearly died of sepsis, but intensive care brought him back. He was the first to be conceived in the U.S. with frozen semen.

It is strange to think of a domesticated breed of farm animal as an endangered species, but these donkeys are precariously close to extinction. There are only 300-400 Baudet du Poitou donkeys left in the world, up from a mere 44 in the mid-1970s. Efforts like the one at Illinois will likely determine their ultimate fate.

The ultrasound goes well. When scanning Sourbette's uterus, Podico sees a tiny 7-millimeter circle of black, which could be a sign of pregnancy, she says.

"We'll check in a couple of days to see if it has grown at all," she says.

We later learn that Sourbette is not pregnant. Podico says the jennies' owner, Bari Fischer, has agreed to continue the effort to expand the Baudet du Poitou numbers. So, the team at Illinois will try again to impregnate these jennies and save the breed.