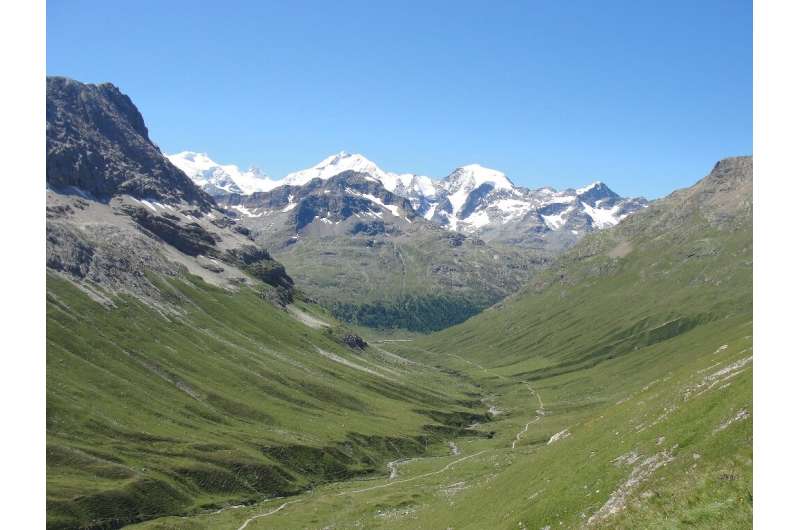 A view of Piz Bernina.

The famous snow-capped peaks of the Alps are fading fast and being replaced by vegetation cover—a process called "greening" that is expected to accelerate climate change, a study said Thursday.

The research, published in Science, was based on 38 years of satellite imagery across the entirety of the iconic European mountain range.

"We were very surprised, honestly, to find such a huge trend in greening," first author Sabine Rumpf, an ecologist at the University of Basel, told AFP.

Greening is a well-recognized phenomenon in the Arctic, but until now hadn't been well established over a large scale in mountainous areas.

However, since both the poles and mountains are warming faster than the rest of the planet, researchers suspected comparable effects.

For their analysis, the team examined regions at 1,700 meters above sea level, to exclude areas used for agriculture. They also excluded forested areas and glaciers.

According to the findings, which covered 1984-2021, snow cover was no longer present in summer on nearly 10 percent of the area studied.

Rumpf pointed out that satellite images can only verify the presence or absence of snow—but the first effect of warming is to reduce the depth of the snowpack, which can't be seen from space.

Secondly, the researchers compared the amount of vegetation using wavelength analysis to detect the amount of chlorophyll present, and found plant growth increased across 77 percent of the zone studied.

"It is climate change that is driving these changes," said Rumpf.

"Warming means that we have longer vegetation periods, we have more benign conditions that foster plant growth, so plants can just grow more and faster," she added.

The effect is additive: "The warmer it gets, the more precipitation falls as rain rather than snow."

And there are several harmful consequences.

First, a large part of drinking water comes from melting snow. If water is not stored as snow, it disappears faster via rivers.

Next, the habitat species adapted specifically to the alpine environment is disrupted.

The snow's disappearance also harms the tourism industry, a key economic driver for the region.

"What we kind of tend to forget is the emotional aspects of these processes that the Alps are like a very iconic symbol and when people think about Switzerland, it's usually the Alps that they think about," stressed Rumpf.

While alpine greening could increase carbon sequestration, feedback loops are more likely to cause a net result of amplified warming, and thawing of permafrost, the researchers argue.

Snow reflects about 90 percent of solar radiation, vegetation absorbs much more, and radiates the energy back in the form of heat—which in turn further accelerates warming, snow melt, and more vegetation: a vicious cycle.

From green to brown?

The future of the Alps can't be predicted with certainty.

"In terms of snow, it's pretty straightforward," said Rumpf. "I would expect the snow cover to disappear more and more, especially at lower elevations."

For the time being, another phenomenon known as "browning"—in which the ground is no longer covered with either snow or vegetation—has only been detected in less than one percent of the area studied.

This is much less than what has been observed in the Arctic, or in the mountains of Central Asia.

It is fueled by two factors: the increase in episodes of extreme rain followed by droughts, and a reduction in water available to plants that was produced by annual snowmelt.

"We do not know for the future whether browning is going to occur more and more," concluded Rumpf, who hopes to repeat the observations in a few years' time.