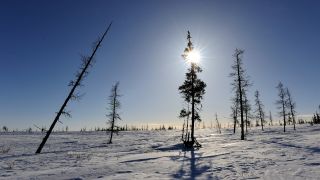 The Siberian tundra could disappear by the year 2500, unless greenhouse gas emissions are dramatically reduced.

Even in the best-case scenarios, two-thirds of this landscape — defined by its short growing season and cover of grasses, moss, shrubs and lichens — could vanish, leaving behind two fragments separated by 1,553 miles (2,500 kilometers), scientists recently predicted. And as the tundra's permafrost cover melts away, it could release vast quantities of stored greenhouse gases into the atmosphere, potentially accelerating warming worldwide.

"This was stunning for us to see how quickly the tundra will be turned over to forest," said ecologist and forest modeler Stefan Kruse of the Alfred Wegener Institute (AWI) Helmholtz Centre for Polar and Marine Research in Bremerhaven, Germany. The loss of the tundra will not only be a blow for biodiversity and human culture, but might also worsen Arctic warming, Kruse told Live Science.

Warming in the Arctic has advanced rapidly in recent decades, about twice as fast as warming in the rest of the globe. Between 1960 and 2019, air temperatures rose nearly 7.2 degrees Fahrenheit (4 degrees Celsius) across the Arctic region, according to the National Snow and Ice Data Center (opens in new tab) (NSIDC). This heat reduced sea ice cover and is affecting the Arctic's land as well. One of those implications is the northward march of Siberian larch forests.

How quickly these forests will replace the grassy, shrubby tundra ecosystem is unknown. Treeline changes in response to climate aren't consistent around the globe, Kruse said. In some areas, treelines have advanced northward. In others, they have remained static; in still others, they've even retreated. Previous research in the Siberian tundra has focused on small areas, but there can be a lot of variability from location to location.

Now, Kruse and his colleague, AWI professor Ulrike Herzschuh, have created a new computer model that evaluates the full 2,485-mile-long (4,000 km) expanse of the Siberian tundra. The model takes into account the life cycles of individual trees: from how far they can disperse their seeds, to how well they grow when faced with competition from other trees, to growth rates based on temperature , precipitation and depth of the summer thaw of permafrost that occurs in tundra regions.

The researchers found that once the trees start marching northward in response to warming, they do so quickly — and they are not likely to retreat again should temperatures cool. Under a scenario in which carbon emissions are reduced to zero by 2100 and global temperature rise remains below 3.6 degrees F (2 degrees C), only 32.7% of today's tundra would remain by 2500. This fraction would be split into two mini-tundras: one in Chukotka in the far east and one on the Taymyr Peninsula in the far north.

But even that bleak scenario may be impossible to achieve without very quick action, meaning that the outcome for the tundra could easily be far worse. In an intermediate scenario in which carbon emissions don't start declining until 2050 and are cut by half by 2100, larch trees would cover all but 5.7% of the current tundra by 2500, essentially annihilating the ecosystem.

In the warmer global scenarios, trees could spread northward by as much as 18.6 miles (30 km), the researchers reported on May 24 in the journal eLife (opens in new tab) . When Kruse and Herzschuh tested what would happen if temperatures cooled after the tundra became a forest, they found that the treeline did not retreat as quickly as it had advanced. Once mature trees are established, they can withstand a lot, Kruse said.

Related: When did scientists first warn humanity about climate change?

The study didn't directly model what might happen to tundra dwellers, such as reindeer , Kruse said, but splitting populations into two regions, where they are cut off from interbreeding, is typically bad for the survival of species. Reindeer (known as caribou in North America) migrate from north to south and back again throughout the year, and it's not known how forest expansion may affect their migration and life cycles.

The impacts are likely to be felt by humans, too. Indigenous cultures such as the Nenets people of northwestern Siberia both herd and hunt reindeer.

"The culture is dependent partly on tundra," Kruse said. "If this gets lost, it will be a major loss for humanity."

How the loss of the tundra may affect future warming is also uncertain, but covering the mossy, scrubby grasslands with tall trees could make matters worse. Snow-covered tundra is lighter in color than larch forest canopy; the forests will therefore absorb more heat than the tundra does, potentially making the Arctic hotter, faster, Kruse said. This additional heat could hasten and deepen the melting of the tundra's permafrost, which stores massive amounts of greenhouse gases — up to 1,400 gigatons globally, according to the NSIDC (opens in new tab) . Permafrost thaw could release these gases as well as long-frozen microbes and viruses .

Change will likely go beyond the replacement of tundra with larch trees, Kruse added. As warmer summers thaw deeper and deeper layers of permafrost, evergreen trees can then move in as well. These trees remain leaf-covered year-round, potentially absorbing even more heat than larch do. The southern side of the taiga, where temperatures are already higher than in the north, will likely heat up even more, leading to drought and wildfires — which release still more carbon into the atmosphere.

The findings present compelling reasons to push for the ambitious reduction of fossil fuel emissions. The model used in the study, however, can also be used to identify the most resilient portions of the Siberian tundra, Kruse said. These resilient areas could be prioritized for conservation investments.

"The best option would be to reduce global greenhouse gas emissions to reduce the pressure," he said. "But nevertheless, if we cannot do that, one needs to do species conservation."

Stephanie Pappas is a contributing writer for Live Science, covering topics ranging from geoscience to archaeology to the human brain and behavior. She was previously a senior writer for Live Science but is now a freelancer based in Denver, Colorado, and regularly contributes to Scientific American and The Monitor, the monthly magazine of the American Psychological Association. Stephanie received a bachelor's degree in psychology from the University of South Carolina and a graduate certificate in science communication from the University of California, Santa Cruz.